Each year, the Dean’s International Research Grant program awards $2,500 to up to 10 students to fund independent travel that informs their research and provides an experience related to their creative or intellectual trajectory. Samuel Lo, a senior in the Department of Photography + Film, received a grant to travel to Hong Kong. Here, Lo reflects on his experience retracing his father’s history and better understanding his own identity.

In May, my father and I travelled to Hong Kong, where he immigrated to America from in 1971. We visited numerous specific sites from his family and childhood history, along with those we visited with other members from my family back in 2011, my first visit to the city. At those sites, and those along our travels in between, I took photographs, objects, audio recordings, and notes.

I had never seen these locations, and there were no photos or images of them, so I created ‘myths’ of what they looked like—what pre-1974 Hong Kong was. During the course of this trip, I specifically focused on these myths: the stories of my father’s life in Hong Kong that I had slowly uncovered throughout my childhood from my father and mother, amalgamated with my imaginings and interpretations of them.

Being physically present in these spaces—seeing, smelling, hearing, tasting, and touching them—allowed me to observe and explore their physical history, as well as become a part of it.

Even though I had visited Hong Kong once before, I was young, and my family primarily visited tourist locations. The Hong Kong side of my identity was not satiated; I yearned to make a pilgrimage back, to confront and become a part of my origin.

Having undertaken this journey, I can honestly concede that this desire has been fulfilled for the time being. This desire and the need for people to visit and become a part of the specific places of their origins is something that not only impacts my life and informs my work on identity; I believe it affects everyone. Thus, one goal of my work produced from this trip is to highlight and discuss the importance of place and heritage to identity.

My father and I learned a significant amount about one another, and bonded over the course of the trip more than any other span of time I can recall. When I witnessed and interacted with him at these specific places, I often learned the rest of their story through his comments and recollections, completing the fractured and obscured stories I had previously understood.

I also gained a better understanding of his mannerisms by seeing him in the context of the people of Hong Kong, which I had previously misunderstood to simply be his own ‘Chinese dad’ quirks. He constantly uses and carries toothpicks, even in public, much to the dismay of my mother. I slowly realized this was part of the culture of Hong Kong. Everyone used toothpicks, and they were available in practically every restaurant. I even took a photo of a street rain drain filled with discarded toothpicks. Suddenly, this ‘quirk’ became a deep-rooted part of his early enculturation, and I can empathize with why he is so set on continuing this habit back in America.

Empathy and vulnerability were key aspects of our interactions with one another during the trip. We were real with one another, would ‘shoot the breeze,’ mused on life, joked around, and ate good food.

My photographs and writing from the trip reflect the deeper understanding and reverence I gained of my father during this trip. Learning about him, his stories, his upbringing, and culture have significantly informed my work produced from this trip.

A major aspect of the trip was visiting my father’s high school in Hong Kong. It is a private, Anglican all-boys school that he was only able to attend with earned scholarships. As a teenager, it was his escape from poverty, crime and pollution that surrounded his childhood growing up in the ghettos of Kowloon. 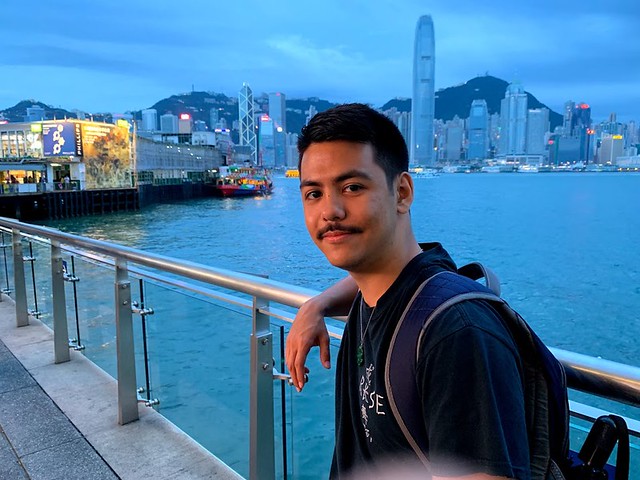 Diocesan Boys’ School is situated on a forested hill, above the noise and smell of the bustling streets of Mong Kok district below. He still has restless dreams about his time at the school, but recalls it fondly and speaks of it often. He was the captain of his house soccer team, a slick troublemaker, and a good student.

It was important for both of us to revisit this place, as he had not been back to it since he left in 1974, and I needed to visit the high school I had heard about in stories for years. He was enthused to see how the school had changed and improved, and I was fascinated to see all the exact sites around the school of where its ‘myths’ occurred.

While eating lunch, we sat down in the private cafeteria. He relayed to me how that was the cafeteria he never had access to since his family could not afford it; instead, he was relegated to the subsidized cafeteria down the hall. He felt humiliated and othered having to stand in line for a segregated cafeteria—separated from the children of the wealthy and privileged—and sometimes cried when he would get home from such demeaning treatment. Now, we ate in the same private cafeteria more than 40 years later, and it struck me just how important it was for him to reconcile this place, and how important it was for me to be there with him.

Another significant moment was discovering that my father had never returned to these places after leaving for America, even though he had returned to Hong Kong several times since then. He also revealed that he had never visited any of his previous homes after his family moved to a new, better one, until this trip. He noted how there was a metaphorical and literal moving forward and never looking back; it was a matter of dignity. The problem was, he never made peace with these places. Even though, I soon realized, he was slightly uncomfortable with returning to and engaging with them, I believe he was finally able to confront them, and the memories, trauma, and pain embedded within them.

This process often revealed to me the hidden parts of their stories and how he actually felt about them, the emotional and psychological responses they evoked in him. It was through witnessing his confrontation and closure with these spaces, that my work became truly cognizant, considering and encompassing both of our complete, lived histories within them.

My research grant trip has become a pivotal point in the progression of my artwork, along with informing my identity and connecting with my father. I was able to explore subjects, themes, and histories that truly matter to me, which I am working to make accessible and relevant to others in the art community and beyond. I was also able to experiment more consciously and lucidly with techniques and conceptual ideas I had learned about and considered throughout my junior year in Photography + Film.

Resources I gathered from this trip look to be my most promising yet, as I continue to work with them and form them to become a progressive, evolving body of work here at VCU, that will likely continue in my future practice.